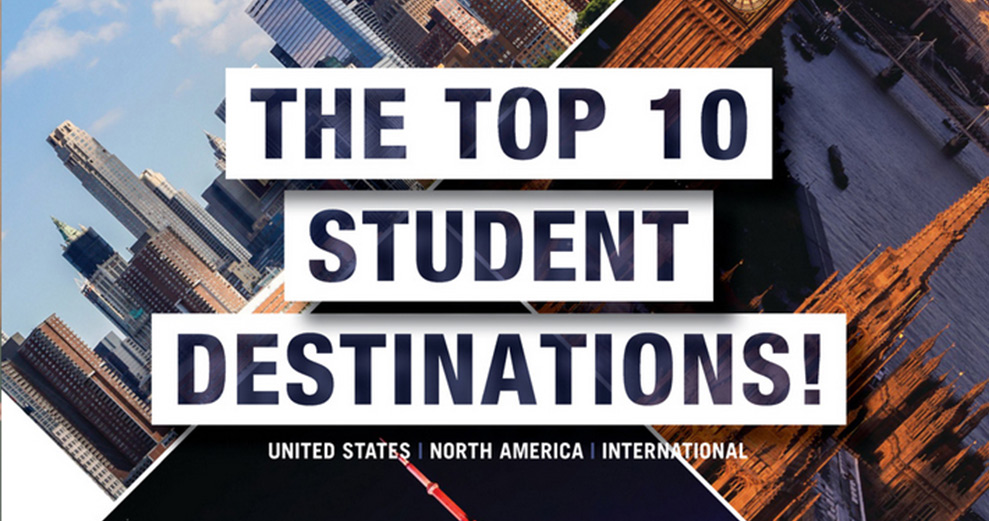 Are your students ready to see the world?

You could always start in the United States.

New York City really has it all!

Situated on one of the largest natural harbors and consisting of five boroughs, New York City offers diverse attractions and captivating experiences, from lush parks and enthralling performances, to immersive tours of world-class museums featuring exhibitions on art, science, history and pop culture.

Join the Manhattan bustle and bask in the bright lights of Times Square and Broadway hits. Performance venues abound for students to showcase their talents—whether dancing, singing or playing an instrument—while workshops led by gifted professionals could strengthen their skills.

Marvel at breathtaking views from the tops of iconic skyscrapers, such as the One World Observatory, the tallest building in the U.S. Visit renowned museums and galleries, such as the Metropolitan Museum of Art, the American Museum of Natural History and the Museum of the City of New York.

Escape into Central Park for picnics, cycling and group games, or break out of the mold to discover the borough’s charming neighborhoods and hidden green spaces outside of Manhattan.

Orlando is celebrated for its world-famous theme parks, yet students could find adventure far beyond the top of a roller coaster.

The state, named for flowers and sunshine, is perfect for eco-tours and sporting activities through gardens, parks and swampy wilderness. Spend a day kayaking, hiking or partaking in a classic Florida experience: an airboat ride through a swamp. The Nature Conservancy’s Disney Wilderness preserve protects 12,000 acres of natural habitat, and students could find outdoor thrills at locations such as Forever Florida – Ziplines & Adventures in the Wild, Zip Orlando Canopy Tours and Orlando Tree Trek Adventure Park.

Engage in the city’s vibrant local arts, culture and history. Find thought-provoking collections at the Orlando Museum of Art, an array of performances in a variety of genres at the Dr. Philips Center for the Performing Arts, and 12,000 years of Central Florida’s rich heritage at the Orange County Regional History Center.

Offering more free activities than any other city in the country, Washington, D.C., is a monumental student travel destination.

Tour the National Mall, animal watch at the National Zoo and visit museums—including any of the 17 Smithsonian museums and galleries—packed with science, history and prominent art. Catch a professional sporting event, or summon students’ inner athletes while meandering the Potomac River or area bike trails.

The nation’s capital is more than a stage for politics: Performance opportunities abound in unique venues, and an array of professional presentations could capture any imagination. The John F. Kennedy Center for the Performing Arts, home to the National Symphony and host of hundreds of world-class performances each year, is the city’s most iconic theater; the notorious Ford’s Theatre serves as a working theater and a museum dedicated to Lincoln’s life and death.

Chicago’s 77 vibrant neighborhoods each deliver their own historical sights, attractions, arts and culture.

The Windy City’s museums exhibit everything from the wide scope of culture, history and art to the specifics of planet Earth, the military and surgical science. The Museum of Science and Industry, with 14 acres of hands-on exhibits, is one of the largest science museums in the world.

Hit the big leagues for stadium tours, and enjoy world-premiere Broadway productions, edgy dramas, live music and more in historic theaters. Tour Chicago’s world-famous architecture by foot, bus or boat; explore the area on bicycle trails; and escape to the Lake Michigan shoreline for an afternoon swimming at the beach.

Los Angeles is the entertainment capital of the world.

LA is more than a screen city, however. Thanks to more theaters than any other U.S. city, the performing arts take center stage. The Pasadena Playhouse provides a variety of cultural and artistic events, from theater and dance to music and opera; the Center Theatre Group, one of the largest theater companies in the nation, presents world-class dramas and musicals.

There’s more to LA than recognized and rising stars. Find cutting-edge thrill rides at area theme parks, including Universal Studios, Disneyland and Knott’s Berry Farm. Bask in sunbathing and sports along LA’s 75 miles of coastline and world-famous beaches. Discover cultural attractions exploring all subjects, from art to science: The city boasts more museums than any other in the United States, with California Science Center and GRAMMY Museum at L.A. Live among them.

Immersive historical tours of settlements, battlefields, archeological digs and more offer a unique look into the discovery of America and its early history. Jamestown Settlement’s museum exhibits and re-creations explore the country’s first permanent English colony, and students could watch history come to life at Colonial Williamsburg, where historical interpreters and actors re-create life on the eve of the Revolutionary War.

In addition to historical attractions, students could soar to new heights on roller coasters at Busch Gardens Williamsburg and other theme parks, and put their skills to the test at adventure parks, such as Go Ape Treetop Adventure.

Theaters offer productions ranging from Broadway-style live shows to dinner theaters, while more than 30 galleries could satisfy student artists with collections of artwork across genres and traditions. The Colonial Parkway and other parks, beaches and trails offer opportunities for students to explore waterways and miles of scenic hiking trails.

The birthplace of the U.S., Philadelphia is the nation’s only World Heritage City.

Tour historic homes, buildings and sites instrumental in the nation’s founding. The Museum of the American Revolution offers a primer on the birth of the nation and an overview of the historical sites located throughout the city, including Independence National Historical Park—the nation’s most historic square mile, where the Declaration of Independence was drafted and debated. Philadelphia is also home to Eastern State Penitentiary, one of the world’s most famous prisons.

Explore art, indoors and out, through the city’s 3,000 murals, renowned museums such as the Philadelphia Museum of Art, and various stages across The City of Brotherly Love,  hosting performances from classical ballet to Broadway productions.

Science isn’t lost in Philadelphia, either. The Academy of Natural Sciences exhibits rare treasures from the earth’s past, the Franklin Institute allows students to walk through a giant heart, and the University of Pennsylvania Museum of Archaeology and Anthropology houses a 12-ton sphinx, Egyptian mummies and more.

Atlanta offers a rich history in a thriving urban setting.

You’ll find historic buildings, sites and monuments along Atlanta’s streets, exploring the city’s Civil War history and role in the civil rights movement. The Atlanta History Center features one of the Southeast’s largest history museums, historic houses, acres of historic gardens and trails, and more; the Center for Civil and Human Rights is dedicated to both the civil rights movement in Atlanta and the United States, and the broader worldwide human rights movement.

Atlanta is also home to international art exhibits at the High Museum of Art, and a Grammy-award winning orchestra. The city’s theater scene offers productions including Broadway musicals and local performances at distinguished venues, among them the critically acclaimed Alliance Theatre.

Ride a 200-foot-tall Ferris wheel for a unique view, go behind the scenes of one of the nation’s leading news centers on a CNN Atlanta Studio Tour, get an inside look inside the World of Coca-Cola, or explore the city’s parks and nature preserves through mountain hikes, river activities and more.

San Francisco: Home to cable cars, the famous Golden Gate Bridge, and a festive waterfront market accommodating a community of sea lions, the city offers plenty of attractions and much to do, yet is only 49 square miles—making it easy to accomplish a lot in a little time.

Here, you’ll find an aquarium, a planetarium, a natural history museum and a four-story rainforest under one roof, for a once-in-a-lifetime science session at the California Academy of Sciences. Alcatraz Island, the prison that held some of the country’s most notorious criminals, looms in the San Francisco Bay for an unmatched history lesson. Exploratorium creates inquiry-based experiences that explore the world through science, art and human perception.

Looking for activities by land and sea? Boston offers a blend of the Colonial past and modern innovation.

Discover landmarks from the Revolutionary War along the red-brick Freedom Trail. Enjoy a theatrical performance re-enacting “the single most important event leading up to The American Revolution” at the Boston Tea Party Ships & Museum.

Engage students in interactive exhibits and hands-on demonstrations at the Museum of Science, and find dinosaurs, meteorites, rare minerals and hundreds of animals from around the world at the Harvard Museum of Natural History. Dive into marine life, whale-watching while cruising the harbor, and encounter animals up-close at The New England Aquarium.

You’ll find works of art from around the world at the Museum of Fine Arts, including more Monet pieces than any museum outside of Paris. The Boston Center for the Arts presents exciting contemporary works by emerging local, regional, national and international artists and houses four theaters, where you could catch a show. Across the city, Boston presents concerts and concertos, classic plays, musicals and much more.