A Day in the Life of a Tour Guide: Tony Spadafora 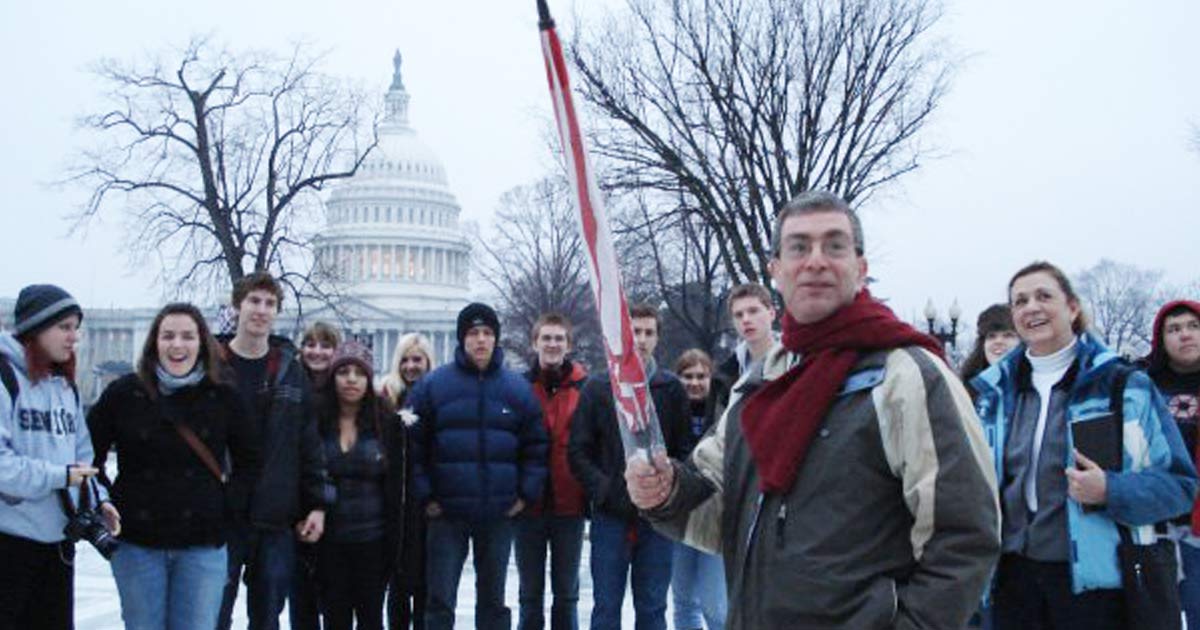 Tony Spadafora is a Professional Tour Guide and Director in Washington, D.C..

How did you end up leading tours and being a tour guide in D.C.?

The short answer is that friends and neighbors suggested I try it out. Like many guides, I started out as a cub scout leader and a PTA volunteer at my son’s school, which led to teaching. When I moved to D.C., I volunteered with the public school’s “We the People” program, giving tours to local students. It became my full-time profession about ten years ago.

What kinds of places and monuments can students anticipate seeing on a tour with you in D.C.?

Should we start at Mount Vernon, Washington’s home? It’s just a few miles downriver and is a nice change of pace. It was for Washington too, during the one long weekend he was home during the entire eight years of the revolution.

“I’ve seen it on TV, but it’s so much bigger in real life,” many students say. They can then look out—as Martin Luther King did when gave he gave the “I Have a Dream” speech. Later on, we can discover what his body language is saying at his memorial, and why is he looking at Franklin D. Roosevelt’s park—a walk through history. We may follow the cherry trees to Thomas Jefferson’s Pantheon, and see who he is keeping his eye on, or take a photo on Einstein’s lap, pay tribute to our veterans, and then visit the Capitol.

Here is a surprise: No ID is required! It’s open to all human beings who can pass through the security check. We’ll then travel up Pennsylvania Avenue, just like an Inauguration Day parade, to see the White House grounds.

These are just a few steps on a path to discover what is special about American history. Not just for us, but for all of humanity. As a Korean war veteran once said, “We learned with our feet.”

What’s your favorite bit of history you like to share with students while they’re on a tour?

The “I Have a Dream” speech didn’t include “I have a dream” as written. Also, the Library of Congress became the largest in the world by accident—a candle fell over on Christmas Eve 1857. The Librarian had no money to buy new books, so he suggested that the copyright law be changed. That’s why every book you’ve read, from The Cat in the Hat on up, has a Library of Congress catalog number. And why do people say there is a “secret face” in the back of Lincoln’s head? There are quite a few pieces to that story.

What’s your favorite/coolest memory from a student tour?

One Memorial Day, I had a band student whose black shoe broke, and she would not be able to march out of uniform. The nearby stores were closed, ridesharing apps didn’t yet exist, and there was only one hotel gift shop open. They didn’t sell any sort of black tape, but called the maintenance man. Not only did he have some electrical tape, he had a spare roll, which he would not sell me.

“Just take it, and good luck to the girl,” he said.

Why do you love to do what you do?

Should I admit it’s because I still get to share stories, but don’t have to grade papers anymore?