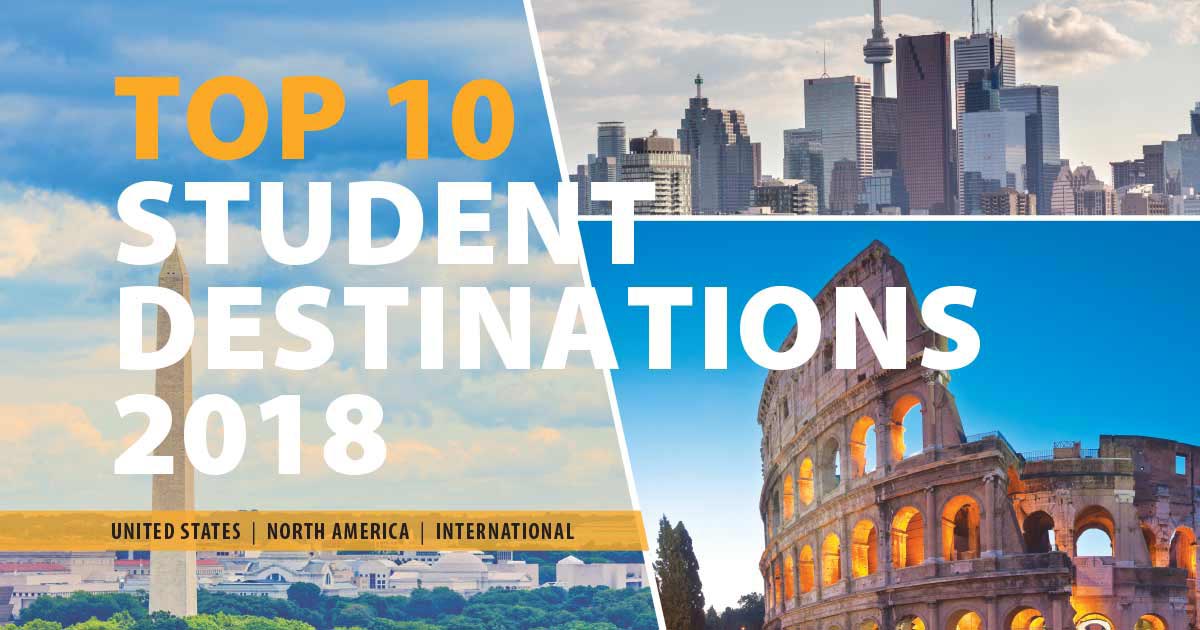 The Student and Youth Travel Association (SYTA) selected these 10 cities as the top United States travel destinations favored by students and teachers for their unique educational opportunities, performance venues and exciting activities.

Washington, D.C., is a historical, political and cultural center where prominent figures—past and present—converge. Home to some of the United States’ most important buildings, monuments and treasures, the nation’s capital immerses students in history, government, innovation, the arts and culture.

Offer students a clearer understanding of how government works. Start at the beginning by viewing the original copies of the Declaration of Independence, U.S. Constitution and Bill of Rights at the National Archives. How do these documents inform the nation today? Tours of the White House, U.S. Capitol and Pentagon allow students to witness government in action.

Yet it’s not all government. Museums offer exploration through most any subject and field: air and space, espionage, art, media, and more. From celebrated paintings to pivotal historical events, students could study the diverse stories, peoples, periods and dreams that made—and continue to make up—the nation.

Washington, D.C., also boasts a thriving theater and performing arts scene. Students could marvel in performances and theatrical productions at distinguished venues—or step into the spotlight for a performance opportunity of a lifetime.

There’s really no place like New York City. Take a harbor cruise or see the sights from the top of iconic skyscrapers, such as the Empire State Building and Rockefeller Center. Catch a Broadway show, go behind the scenes for workshops and tours, and perform on some of the world’s most famous stages. Explore renowned museums like the American Museum of Natural History and the Metropolitan Museum of Art—each offering educational programs and hands-on experiences in art, literature, science, history and more. In New York City, students can get a taste of the world: Thousands of eateries feature cuisines from every corner of the globe.

The theme park capital of the world has plenty of thrills. From Universal Orlando and Walt Disney World to Sea World, amusement and theme parks offer educational programs and performance opportunities. Located within the heart of the state named for beauty and sunshine, Orlando is a stellar destination for exploring nature. Eco-tours, airboat tours, hiking and kayaking allow students to discover the outdoors and learn about ecosystems—and they could get up close to animals at Discovery Cove. Visit the Kennedy Space center for an out-of-this-world experience.

Chicago is a treasure trove of design. Tours and STEAM opportunities abound for students to explore the birthplace of modern architecture—and the only city with a river that flows backward. Leading museums, such as the Museum of Science and Industry and the Field Museum, allow students to probe every inch of the universe and its history, from the depths of the ocean to the expanse of space. More than 200 Chicago theaters set the stage for everything from comedy to thought-provoking plays and Broadway hits, and there’s no shortage of music, dance, cinema and visual arts.

Known as the Cradle of Liberty, Philadelphia is where the United States’ story as a political state began. The city claims fame to the nation’s most historic square mile, featuring iconic symbols and storied re-enactments of the country’s early history. Visit Independence Hall, the Museum of the American Revolution, and many other landmarks and institutions to follow in the footsteps of the United States’ founding fathers. Theater, music and dance come to life at state-of-the-art performance venues, while world-class museums showcase celebrated art exhibitions and offer lessons on anthropology, science and medicine—complete with a walk through a giant brain and heart.

Boston harbors a rich history, vibrant arts and cultural community, and is a vast arena for sports and recreation. The Freedom Trail Tour immerses students in the story of the Revolutionary War from diverse angles, and museums analyze historical events, display great works of art and offer hands-on exhibits across the disciplines. You’ll find the Boston Tea Party Ship and Museum, the Salem Witch Museum, the USS Constitution and Museum, and so much more. Broadway casts, orchestras, dance troupes and others take the stage in premier venues. Professional sports teams take the field, park, court and rink.

Endless diversion awaits in the Entertainment Capital of the World. Students could go behind the scenes of their favorite movies and television shows on studio tours, enjoy renowned theatrical productions, witness astounding performances in premier venues and catch games of celebrated teams. As a trend-setting global metropolis, Los Angeles boasts a fascinating history and rich cultural heritage—with an impressive score of museums and galleries. Amusement parks such as Disneyland Park and Knott’s Berry Farm are close by, and the city’s 75 miles of coastline offer plentiful exploration.

The city that music calls home is a prime destination for student musicians and performers. Music City is home to museums exploring the rich history of music in Nashville and beyond, live performances every day, and plenty of stages for students to hone their skills in front of audiences. You’ll find iconic music landmarks such as the Grand Ole Opry, Ryman Auditorium, and the Country Music Hall of Fame and Museum. Nashville’s high notes aren’t only musical, either. The city’s culinary scene is flourishing and there are ample opportunities to explore science and United States history.

Learning and adventure go hand-in-hand in Williamsburg. Live history museums, tours and plantations allow students to journey into the past and learn about the United States’ beginnings. Colonial Williamsburg and the Jamestown Settlement offer educational programs and interactive experiences where students can engage with history lessons. Audiences await student performers at area attractions, and students can ride world-class roller coasters at Busch Gardens Amusement Park.

The Battle of Gettysburg was a turning point in the Civil War. Today, the town of Gettysburg is a prime destination for interactive lessons on history. The past comes alive through presentations, re-enactments and encampments at sites such as Gettysburg National Military Park. Students could tour battlefields, cemeteries, museums and other historical sites. Gettysburg—located within one to two hours of Philadelphia and Washington, D.C.—is the perfect excursion to add to an East Coast tour.